Many Visitors to Thailand's resort towns of Phuket, Hua Hin and Samuai - Surat, ended up enjoying the paradise longer than they have originally planned. This will require to renew one's visa in Thailand and mostly they do it via Ranong to Myanmar Kawthaung - Victoria Point.

From Samui you cross the channel by ferry and then take a cab or bus for 3 hours north from Surat Thani to Ranong. From Ranong it's half an hour over the water to Victoria Point in Myanmar. You don't even have to leave the jetty compound (immigration office) stay on Myanmar land for 15 minutes and come back to Samui. It is much closer than the Hat Yai / Sadao border visa run. From Phuket, Visa Run to Myanmar from Phuket must get to Ranong in the first place. This can be done in one day and you can organize it with a number of travel agents. Try the ones in Khao Lak to the left of the Nang Thong Supermarket. We found a very helpful post in Phuket Gazette By Tim Newton - September 3, 2017 -Tim says you can do it commando-style in one of the many passenger vans that do packaged visa runs any day of the week. Honestly, you’re taking your life in your own hands with some of the van drivers. We drove a private car and had many, many of these turbocharged grey monsters passing us, some of them racing each other – and full of tourists. The road is good but it’s mostly twists and turns and only single lane in each direction.

(We should add that the drive is very scenic and the road conditions very good.)

You’ll need to take the following things along with you on your journey. Your passport, your work permit (if you have one), a signed photocopy of your passport and a crisp, unfolded US$10 bill. If it’s not crisp and unfolded they will likely reject it when you get to the Myanmar passport office.

In Ranong, waiting out the front of the entrance to the passport control area is any number of touts, motorcycle taxi drivers, thieves, scammers and other local thuggery. You will also get to enjoy the scent of rotting fish that pervades the entire precinct. Look like you know what you’re doing, even if you don’t, as all these touts will descend on you to devour their latest prey.

The boats are the usual long tail boats which are unlikely to survive waves of more than a few inches. There is a cover so you’re protected from the sun. There are a few stops as you head out into the bay, immigration stops as the boats are departing one country and heading to another. 30 minutes and a few photos later we arrive in Kawthaung. If Myanmar was Star Wars, Kawthaung would be Mos Eisley. “You will never find a more wretched hive of scum and villainy.” Obi Wan Kenobi, Star Wars Episode IV. (I am rather proud to have combined Star Wars into a story about visa runs in Thailand). Krawthung is the most southern town in Myanmar and used to be called Victoria Point during British rule. Getting from your long tail boat to the Immigration Office is a walk of less than a hundred steps but not before you’re offered all sorts of trinkets, accommodation, transport and girls.

The stamp in the office, once you hand over your pristine, unfolded US$10 bill, takes a couple of minutes. And you’re done.

Back to the boat.

I was in Myanmar a total of about four minutes.

* Choose a safe company that doesn't drive at Need-For-Speed as you may want to enjoy the journey rather than be gripping yr seat and watching the maniacs drive. See Ranong Express Buses or your own taxi who you have control.

The Ranong visa run is one of the prices you pay for living in a tropical paradise. Prepared to lose a day, spend about 1,500 baht and have to pay a visit to the sleepy town of Kawthaung which seemed to lagged 15 years behind its Thai counterpart. The experience of 2 country 1 visa run worth the hassel. One thriving town with Gold shops, 5 star hotels and shiny cars and the other town with rusty jetties, falling river banks with Golden Pagodas trying to survive the state being left to rot by its own people.

According one traveller who has left his passport with a travel Agent ran into problems when upon hi return to Samui, he was informed that "the government is cracking down on corruption and we can no longer pay the border guards to pass your documents." He has only 2 days left on his Thai Visa.

Having little love of travelling in Malaysia (been there too many times) I headed off to Myanmar, the land of precious gems and thriving fishery & timber business. But the far south of Myanmar is rather a long way from the ruling generals way up in Naypyidaw. And being so close to Thailand with just a strip of water between them, they've more or less done an adaptation routine and you'd barely know you'd left Thailand anyway. Local Thais and Burmese travel daily between Thailand and Myanmar in a variety of vessels doing their business and trade.

The the details his journey will be a big yawn, particularly the part where he forgot to go sign out before he went to Myanmar so had to do a second crossing to get his visa stamped out of Thailand. Or the propeller on the boat breaking half way back across. Nor about the storm and yours truly spending an hour bailing the boat while we waited for a new propeller half way between Thailand and Myanmar.

Generally to travel there from Samui you would book the air-conditioned bus / ferry ticket to Surat Thani. From any point in Surat you'd book the minibus to Ranong. The minibus will drop you off at the location of your choice. The prices of these fares are the standard stuff for this region. Say, 250 Baht for the bus/ferry to Surat and then another 150/200 Baht for the minibus to Ranong.

In my opinion, the main points when you do a visa run to Ranong/Myanmar are as follows:-

After you’ve paid any necessary fees and received your exit stamp you have to cross the Pakchan river to get to Myanmar. There are plenty of boatmen trying to take you. The boat trip costs about 250 baht for the whole boat charter. The boatmen will guide you to Myanmar immigration where you receive the right to enter the country for a fee of $10 US and can stay for 10 days. For Thais it will be 30Baht for 7 days.

Now you have the option to shop around for a bit if you like and enjoy the Myanmar way of life, buy some cheap booze or Pills as touted by the little guys at the jetty or you can take a day trip to the islands of Myanmar also known as Mergui Archipelago - famous for its pristine beauty and abundant of marine life. It is more convenient to buy the packages at Ranong in places like Pon's Place, Kiwi Orchid (near Bus Station), Jansom Hot Spa Hotel, or on the internet at www.ranongexpress.com . Some will take you back to Ranong and to the hotel with their own boats and cars.

After that make sure you leave Myanmar at 6:00 p.m before immigration close. Thai Immigration will tolarate a bit if you are as late as 7:00 p.m Thai Time (By the way Thai is 30 minutes ahead of Myanmar).

Generally the process is :

There are options to go to the border at Sadao, way down past Hat Yai. Or worse still you can travel even further to Penang or Kota Baru in Malaysia, all quite lengthy journeys of many hours.

4. Make sure you have transport back to the Thai immigration office at the boat pier and keep in mind that the office shuts completely at 6PM. If you are late you must go back first thing in the morning and fix the problem. It may involve a very small fine.
2) Myanmar vs. Vietnam? Is Myanmar better or vietnam? the cheapest one (for a student.)

Would depend on what kind of visa run you need. If you need to renew visa exempt entry, Myanmar is best, but I don't think you'll be visa exempt. For tourist visa renewal it would be Malaysia, Penang or Kuala Lumpur. If you are here

on an ED visa that needs an extension the Phuket immigration office would be the place to go.

There also is a well maintained golf course in Kawthaung. 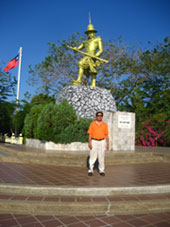 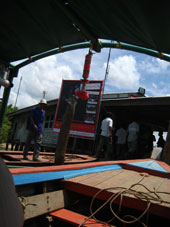